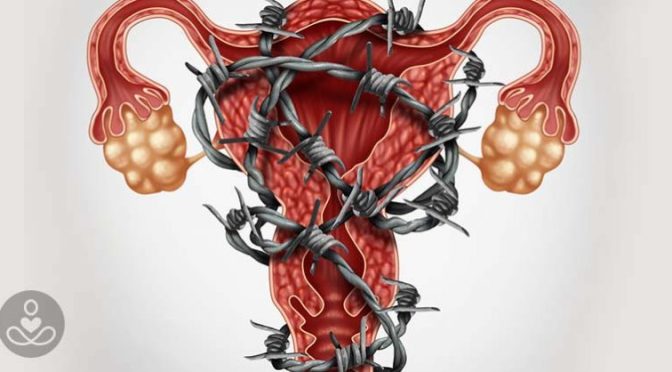 Feature Image of artistic depiction of female pelvic area in pain due to endometriosis sourced from:

Jessica Hirst (28), a mother of a baby boy, has endured severe pelvic pain due to aggressive endometriosis since she was 11 when her periods started.

Jessica and her family

‘It feels like someone is stabbing me repeatedly in the abdomen.  I get a constant burning pain.  There’s an aching that starts in my lower back and comes right down through my legs … it feels like there’s a bowling ball in my uterus.’

Unable to work due to pain, Jessica relies on her husband as her full-time carer.  Despite her excruciating pelvic pain, Jessica finds joy and happiness in their 18-month old baby boy.  Jess is urgently in need of treatment.

Endometriosis is a painful disorder that affects up to 10% of all women of child-bearing age.  This includes approximately 1.5 million women in the UK and 176 million women worldwide.

Furthermore, 71% to 87% of all women with chronic pelvic pain plus 38% of all infertile women have endometriosis.

Endometriosis occurs when the tissue similar to the lining inside the uterus (i.e. endometrium) grows outside of the uterus.  This tissue may be found on the ovaries, fallopian tubes, tissue lining the pelvis (i.e. pelvic peritoneum), ureter, bladder, bowel and recto-vaginal septum.  It has even been found in the lungs and diaphragm in rare instances.

Endometriosis can cause severe pelvic pain during periods, ovulation and/or sex.  Heavy and/or irregular menstrual cycles, infertility, low energy levels, poor sleep and fatigue result.  Symptoms vary depending on where the rogue endometrium grows.  This can affect the women’s overall health and well-being (Amsterdam et al, 2005).

Women often suffer years of pain before they are finally diagnosed with endometriosis.  It takes 7.5 years on average before endometriosis is diagnosed.  This is because the pain and other symptoms are all-too-often dismissed as ‘normal’ and ‘not serious’.

Endometriosis is diagnosed via biopsy obtained during diagnostic laparoscopy.  This involves keyhole surgery under general anaesthetic.

Endometriosis is said to be incurable (Howarth, 2019) …

Several treatments exist that may offer relief from pelvic pain due to endometriosis:

Whilst excision of endometriosis may offer pain relief in some women, multiple surgeries may be required.  Furthermore, there is a risk of recurrence.  Finally, surgery is more invasive than treatment involving aromatase inhibitors.

Aromatase inhibitors have been used to treat postmenopausal breast cancer patients for over 10 years.

An American study found that aromatase inhibitors (letrozole) significantly reduced pelvic pain due to endometriosis in 9 of 10 patients.

Ten (10) premenopausal patients with endometriosis who had undergone surgical and medical treatment were selected for this study.

Endometriosis was confirmed via biopsy obtained during diagnostic laparoscopy.

Oral treatment of letrozole, together with norethindrone acetate, calcium citrate (to minimize bone loss) and vitamin D (to strengthen bones), was offered daily for 6 months.

This 2nd biopsy showed nil endometriosis in all 10 patients.  Nada!

Furthermore, pelvic pain due to endometriosis was significantly reduced in 9 out of 10 patients following letrozole treatment for 6 months.  Bone density appeared unaffected.

A 2nd American study led by the same doctor revealed that another aromatase inhibitor called anastrazole also decreased pelvic pain due to endometriosis.

Fifteen (15) premenopausal patients with endometriosis and pelvic pain were selected for this study.

Oral treatment of anastrazole and oral contraceptive was offered daily for 6 months.  Anastrazole treatment led to suppression of estradiol levels.

Maria had initially undergone a subtotal hysterectomy as well as removal of both ovaries in an unsuccessful bid to reduce pelvic pain.

Given these encouraging results, treatment was continued for another 6 months.

Jane had previously undergone a hysterectomy as well as removal of her ovaries and fallopian tubes.

Guess what happened next?

Bone density was however decreased by 6.2% following 9 months of aromatase inhibitor treatment.

Both women received oral aromatase inhibitors (anastrozole), oral contraceptives (for birth control), calcitriol (to minimise bone loss) and rofecoxib (for pain control) on a daily basis for 21 days followed by 7 days off (i.e. a cycle).  Six cycles were offered over 6 months.

Within only 3 months, pelvic pain and other symptoms of endometriosis were eliminated in both sisters.  These positive effects lasted over a year, post-treatment.

There was nil evidence of endometriosis disease in one of the 2 sisters, as confirmed via laparoscopy done 15 months after treatment.

Recently, Joan had right-sided sciatic pain that radiated down her right leg due to recurring endometriosis.

A pelvic ultrasound confirmed an endometrial mass that compressed against her lumbo-sacral plexus.  This mass was 4cm X 8cm in size.

A daily oral aromatase inhibitor (letrozole) was offered to treat this large mass.

Due to a successful outcome, oral letrozole was stopped after 21 months.

Recurring endometriosis may successfully be treated via an aromatase inhibitor (letrozole).  This is a less invasive treatment option than surgery (Fatemi, 2005).

THE SCIENCE BEHIND ENDOMETRIOSIS AND AROMATASE INHIBITORS

An enzyme called aromatase is important in oestrogen production.  This enzyme is absent in normal endometrium in the uterus.

However, this enzyme is aggressively produced in endometriosis, an oestrogen-dependent disease.  Increased aromatase activity leads to high estradiol levels in endometriosis.

Being potent oestrogen blockers, aromatase inhibitors ‘starve’ endometrial tissue of oestrogen.  This leads to shrinkage, and in some cases, complete elimination of endometriosis.

Thus, in the presence of aromatase inhibitors (that block oestrogen production), endometriosis may shrink, and even vanish altogether, during daily letrozole or anastrazole treatment for a certain period of time.

If you know someone with endometriosis, please forward this blog post to her.

(1b) Ailawadi et al. Treatment of endometriosis and chronic pelvic pain with letrozole and norethindrone acetate: a pilot study. Fertility and Sterility (Feb 2004); 81(2): 290–296.

There are many support groups including:

(1A) Endometriosis – Perth Sisterhood of Support.

Above support group is run by endometriosis sufferers, Joanne McCormick and Monique Alva (see below story).

This is the story of my exploration on matters of chronic pain.